After the trip to Cleveland, with a deeper understanding of the role its procurement could play, CCB pledged to collaborate with other Brooklyn hospitals to support local MWBEs. They are hoping to encourage the hospitals to localize procurement and leverage their real estate, employment and coordination capacity to support and sustain local wealth-creation.

According to Maimonides’ Shari Suchoff: “The idea that we could get the head of procurement from all the One Brooklyn Health hospitals and Maimondes on the phone, thinking of ideas together . . . that is not something that would have happened 5 years ago.” In particular, CCB and the Coalition began looking to build the anchor supply chain in Brooklyn in ways that support local MWBEs. 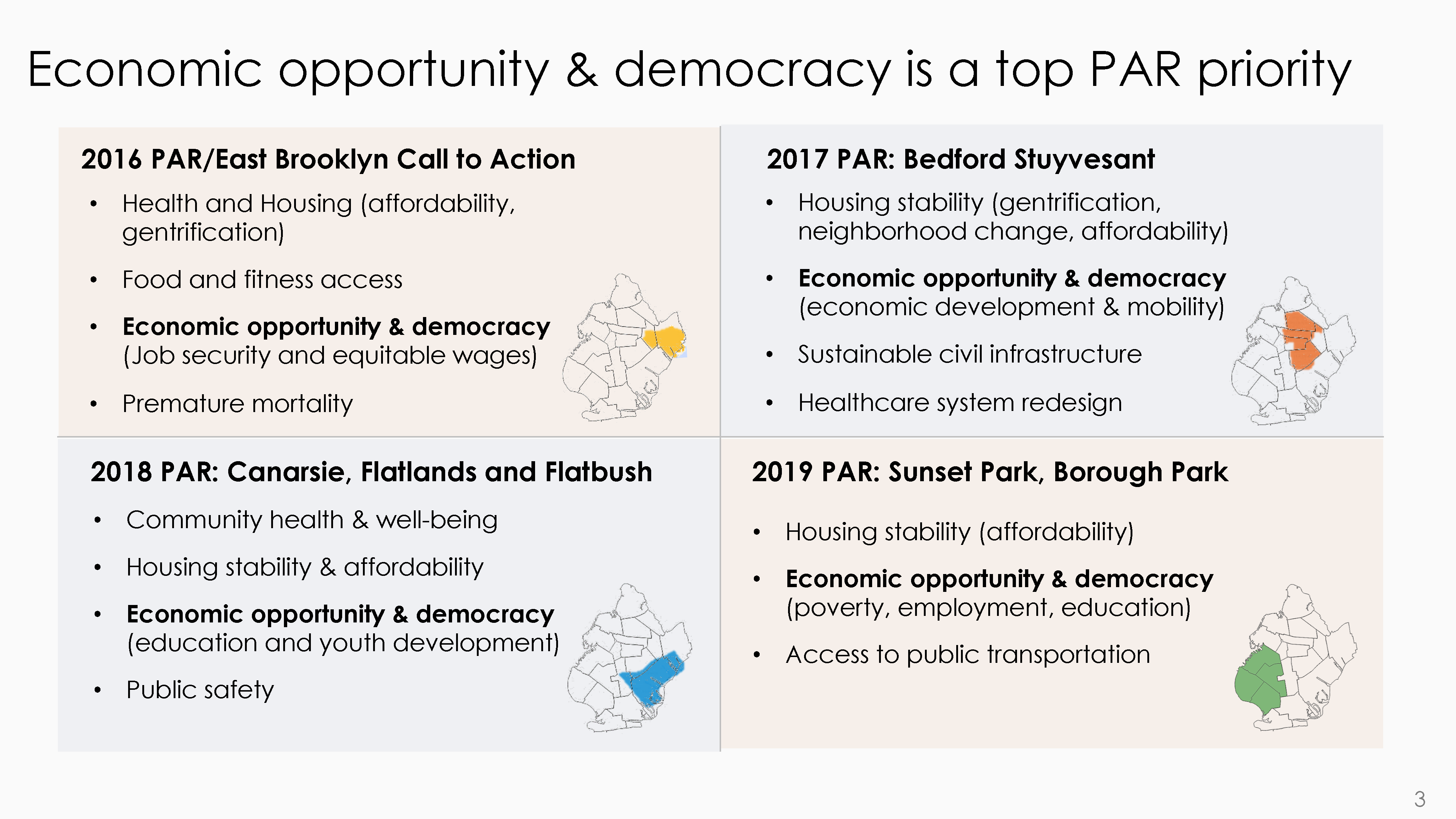 In March of 2017, Coalition and CCB efforts received a major boost from New York State with the announcement of the Vital Brooklyn initiative, built in part on the recommendations of the CCB and Coalition’s Wellness Empowerment Brooklyn PAR (WEB PAR) process.  Vital Brooklyn  offered “a model for community development and wellness breaking down barriers to health and wellbeing through eight integrated program areas”  initially identified in PAR I as necessary elements of wellness: open space and recreation, healthy food, community-based health care, comprehensive education and youth development, economic empowerment and job creation, community-based violence prevention, affordable housing, and resilience.88 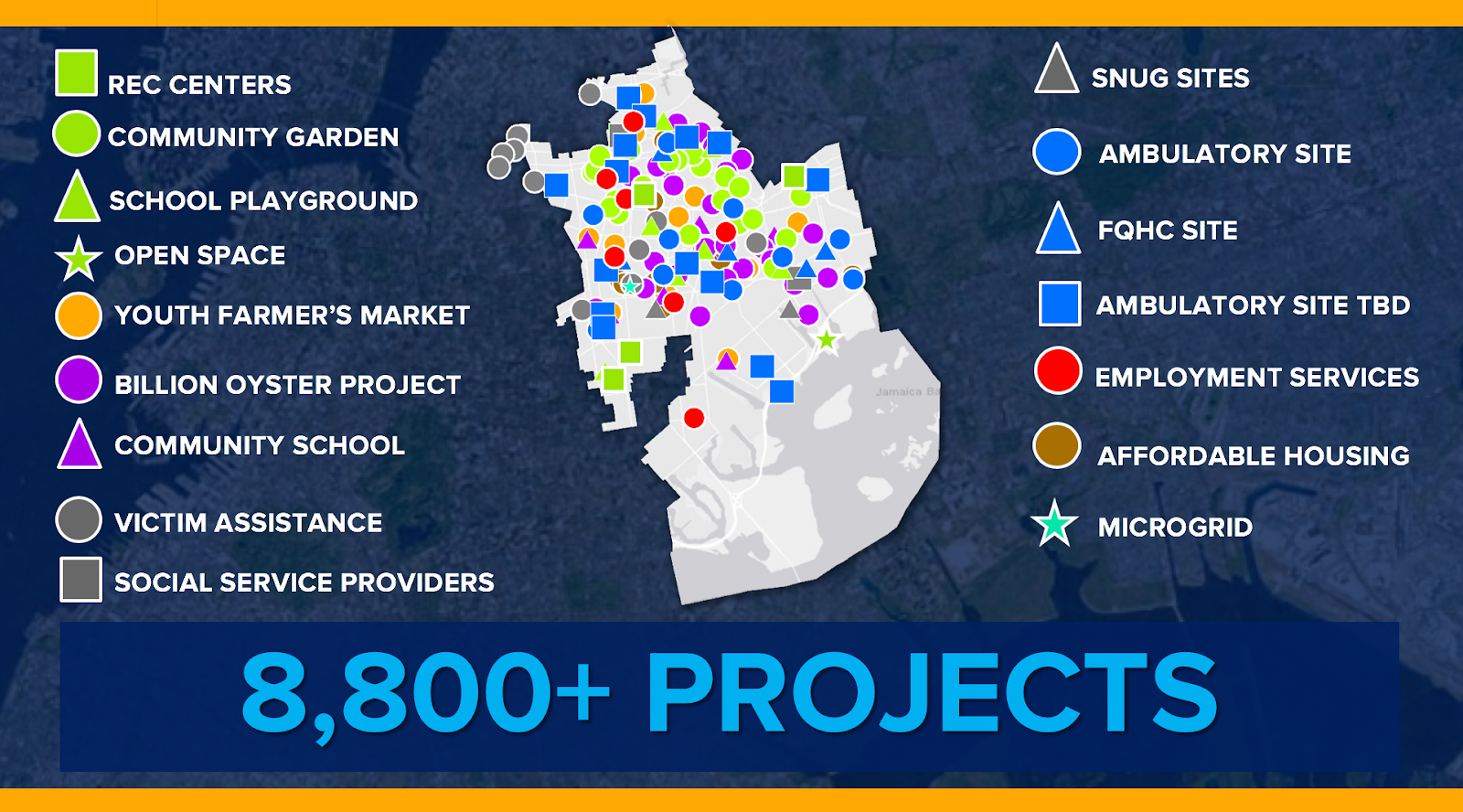 Since 2017, the CCB and the Coalition have been working to develop a range of interventions that could improve community health while also creating new community jobs and revenue streams. CCB also plans to make investments in local health-related enterprises that offer opportunities for community wealth-building; for example, healthy food, fitness and nutrition programs and businesses. as well as health services businesses.  In addition, they’ve invested in double-bottom-line enterprises such as Brooklyn Sprout, an urban farming company specializing in hydroponics. In the longer term, the Coalition and CCB hope to build a “Health Enterprise Hub.”

The Hub will encourage development of unionized worker cooperatives, as well as local businesses, capable of fulfilling anchor needs and with growth potential to participate in the broader regional economy.  One of the first businesses now being brought on line is UpAiQ, a smart logistics and warehouse operation that will enable local hospitals to better manage and share equipment rather than individually invest in expensive and redundant inventory.  During the pandemic, UpAiQ has been able to support Central Brooklyn hospitals with allocating much-needed ventilators to patients in real time. The company plans to offer employee ownership options for various segments of the business.

CCB and the Coalition are also planning support for equitable housing development strategies, the creation of healthcare worker housing, and remediating aging housing stock to eliminate poor health conditions such as lead paint and asthma-triggering vermin.

Though they were once perceived as liabilities in the community, the One Brooklyn Health hospitals are seeking to transform themselves into drivers of community wellness by focusing on comprehensive initiatives that improve wellbeing. Central to their approach is collectively localizing their procurement streams to measurably impact the local economy and thereby begin addressing the social determinants of health. This level of coordination would have been unthinkable before the Coalition and CCB began working together.

CCB and Coalition have also embraced workforce development in key Brooklyn growth industries including healthcare, energy efficiency, and advanced manufacturing and construction. They seek to target formerly-incarcerated persons for job training to stave off the potential cycle of unemployment and underemployment. And, as the culture of health grows, additional stakeholders have come to the table. In 2018, the Greater New York Hospital Association—a healthcare trade association with affiliated general purchasing organizations that spend approximately $7 billion annually—announced a campaign to incorporate Brooklyn MWBEs and local worker-owned cooperative businesses into their procurement streams.

These plans highlight the importance of community members taking action over time to shape and govern their local economy -- economic democracy. To be effective, economic citizens, residents must develop the ability to identify community issues, determine needs, and develop strategies.  In Central Brooklyn, these abilities were developed through the ongoing process of community meetings and discussion. Coalition Co-Chair, Bruce Richard observed: “[A]ny work that’s going on in the community, the community needs to have a very decisive voice in that, and there needs to be collaboration to make sure that this is done in a way that strengthens everyone, and maximizes success in every way.”