An Epidemic of Hospital Closures

By the time Brooklyn’s Interfaith Medical Center filed for bankruptcy in 2012, nineteen New York City hospitals had closed in the prior ten years.2 Four of them were in Brooklyn alone. Interfaith itself was in dire financial straits--losing $3,000,000 each month. The hospital could no longer afford its malpractice insurance and would soon be unable to meet its payroll.3

In the two years prior to Interfaith’s threatened closure, New York State had shut down St. Mary’s, Victory Memorial, Mary Immaculate, St. John’s, St. Vincent, St. Vincent Westside, and Long Island College Hospital in New York City. Now it was proposing to close Interfaith and Brookdale Medical Center as well. This latest round of threatened closures meant that patients in Central Brooklyn would have further to travel for regular care and would face increased risk in emergencies.4 Interfaith also provided much-needed behavioral health services in the community. “[If] Interfaith closes, we will have no place where we can send a decompensating mentally ill person from our emergency department,”5 Ramon Rodriguez, CEO of nearby Wyckoff Heights Medical Center, noted at the time. 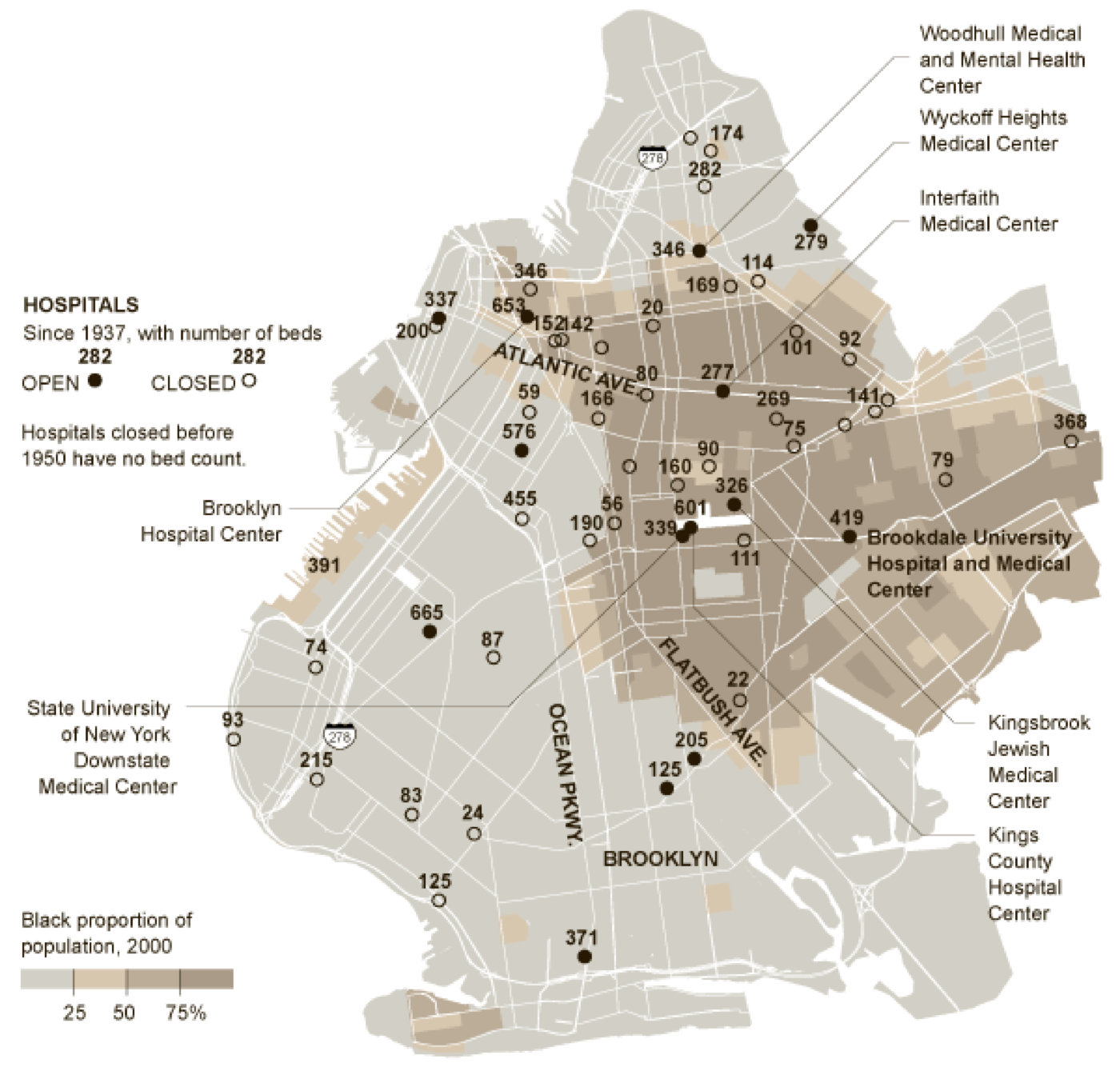 The prospect of a hospital closing is serious for any community, but the stakes were especially high for Interfaith’s predominantly black and brown neighborhoods. Deeply affected by racial segregation and its impact on health, wealth and related outcomes, life expectancy in the neighborhoods is as much as six years lower than the New York City (“NYC”) average, while hospitalization rates for diabetes, asthma and other life-threatening conditions are double the NYC average.6

In the US, health care accounts for only 10% of premature mortality. The social determinants of health (SDOH) -- circumstances into which people are born, grow up, live, work and age -- have a more significant overall impact on individual and population health. SDOH include factors that lead to racial disparities in rates of chronic illness: lack of primary care, healthy food, and education; high levels of unemployment and underemployment; housing instability, and high rates of violence. Improving living conditions keeps people healthy; health improves with increasing income, education and occupation, and declines with poverty. Known as the social gradient in health, this phenomenon is measured by outcomes such as heart disease, mental illness, respiratory problems, body mass index (BMI), and mortality.

Central Brooklyn neighborhoods face shocking economic and racial disparities. Brooklyn is NYC’s most populous borough. Its 2.6 million residents comprise 31% of the city’s total population. While 1 in 5 Brooklyn households has an annual median income above $100,000, 1 in 5 households receives food stamps. Nearly 1 in 4 Brooklyn residents lives in poverty; it ranks first in NYC for total number of children living in poverty. Five of the city’s ten poorest census tracts are in Brooklyn. Brooklyn has the highest concentration of low-paying jobs in NYC7 and incarceration rates in predominantly black and brown Brooklyn neighborhoods are as much as four times higher than the NYC average.

Nearly half of Brooklyn’s residents, 1.2 million people, are Medicaid beneficiaries. The majority of Medicaid beneficiaries are located in predominantly black and brown communities such as Brownsville, Crown Heights, and East New York. Negative health outcomes are not just based on individual status; they are also influenced by the level of disadvantage in the surrounding neighborhood. Research shows strong associations between residential segregation and poor health outcomes, and between experiences of discrimination, chronic stress, and related long-term health challenges. Segregation, interpersonal discrimination, and structural racism constitute serious assaults on health.9

Many Brooklyn neighborhoods are characterized by racial segregation and its attendant effects on health. Thus, Bedford Stuyvesant residents’ average life expectancy is 4.4 years shorter than the overall NYC average.  Canarsie’s rate of severe maternal morbidity is almost double the rate of NYC overall. And East New York’s rate of hospitalizations of preventable diabetes is twice NYC’s average.10 Brownsville’s rates of hospitalization for asthma per 10,000 children ages 5 through 14 is nearly twice NYC's overall average.11

The closure of Interfaith would have further imperiled patients in Central Brooklyn. Shuttering hospitals also eliminates hospital jobs that are important for the economic stability and well-being of surrounding neighborhoods. Frequently, hospitals are the largest local employer, and through procurement and physical plant maintenance, they make critical contributions to the local economy.