As healthcare system reform began to unfold,  NYSNA and 1199SEIU sought expert help in developing a revitalization plan for Interfaith. They turned to MIT Urban Planning Professor, J. Phillip Thompson III, to conduct an assessment of community health needs and assets, as well as an economic impact analysis of Interfaith’s threatened closing on surrounding neighborhoods. Thompson was also tasked with making recommendations to the unions about a future course for Interfaith.43

The MIT Report, Caring for Today, Planning for Tomorrow (“the MIT Report”) built on four previous Central Brooklyn health needs assessments all of which found that the community was grappling with serious health challenges, including high rates of chronic disease, premature mortality-- the rate at which people die too young, and avoidable hospital utilization compared to New York City as a whole.44  It offered a uniquely broad perspective on community health needs and highlighted the role of the social, built, and economic environment in shaping resident health.  It noted the heavy cost, both in terms of human lives and avoidable medical expenses, of the existing healthcare failures in Central Brooklyn.

The MIT Report described Central Brooklyn as “ . . a rapidly gentrifying, historically poor, and predominantly minority community.” It noted that over 40 percent of working-age adults are either unemployed or not in the labor force. More than 36 percent of children live in poverty, and huge income disparities exist by race.  Development pressures and changes to the housing market brought by pockets of rising property values magnified pressures on existing residents.45 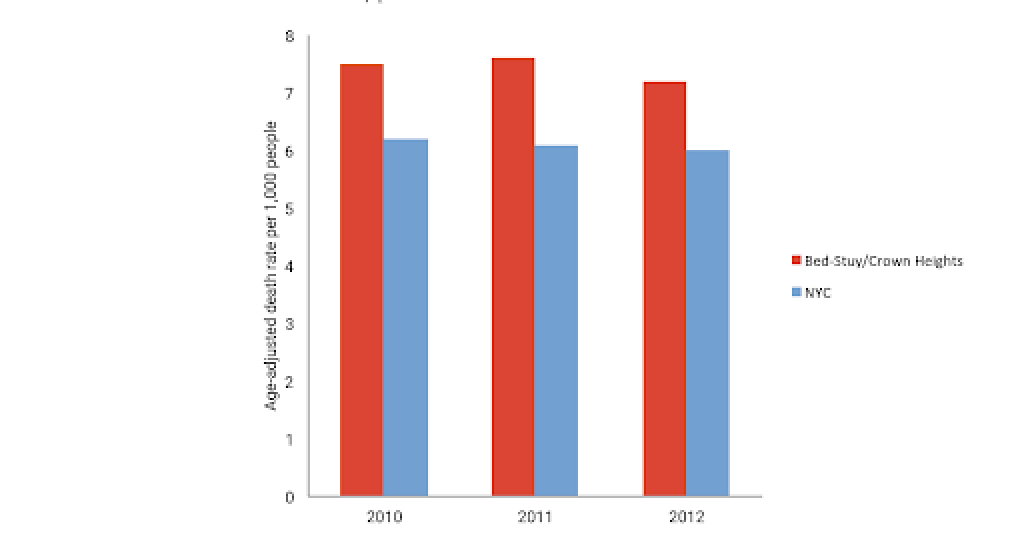 Heart disease, cancer, HIV and HIV-related complications, and homicide were among the largest contributors. Upstream contributors common to many of the area’s top 10 causes of mortality include obesity, poor diet, a lack of physical activity, substance use, including smoking and alcohol consumption, stress, and violence, among other social determinants of health (SDOH).   The Study found that much of the community’s health burden could be traced to these and other upstream factors.

Deaths due to heart disease. Source: Bureau of Vital Statistics

It found that diabetes was one of the most common health concerns for the area.  The percentage of Central Brooklyn adults diagnosed with diabetes surpassed NYC and borough averages. 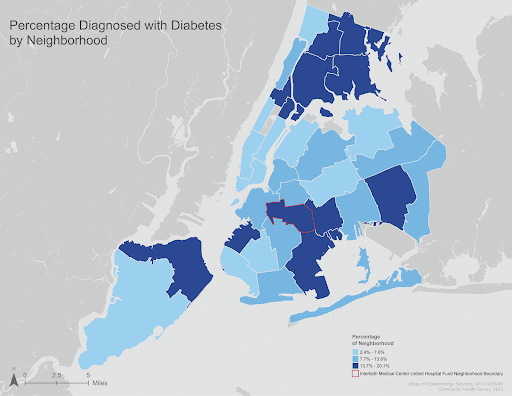 In terms of hospital usage, based on 2012 Medicaid data, the Study identified hypertension, asthma, and diabetes as the three most common chronic conditions responsible for hospital admissions in the study area. Hypertension and asthma accounted for nearly twice the number of Emergency Department (ED) visits as the next most common chronic causes. Residents suffering from asthma made multiple trips to the ED each year to help control their condition.48  In addition to asthma, the MIT Report identified the top preventable ED visits by number of visits  were related to congestive heart failure, pneumonia, diabetes, COPD, epilepsy, and cellulitis. These potentially preventable events totaled about $58 million in costs annually.49 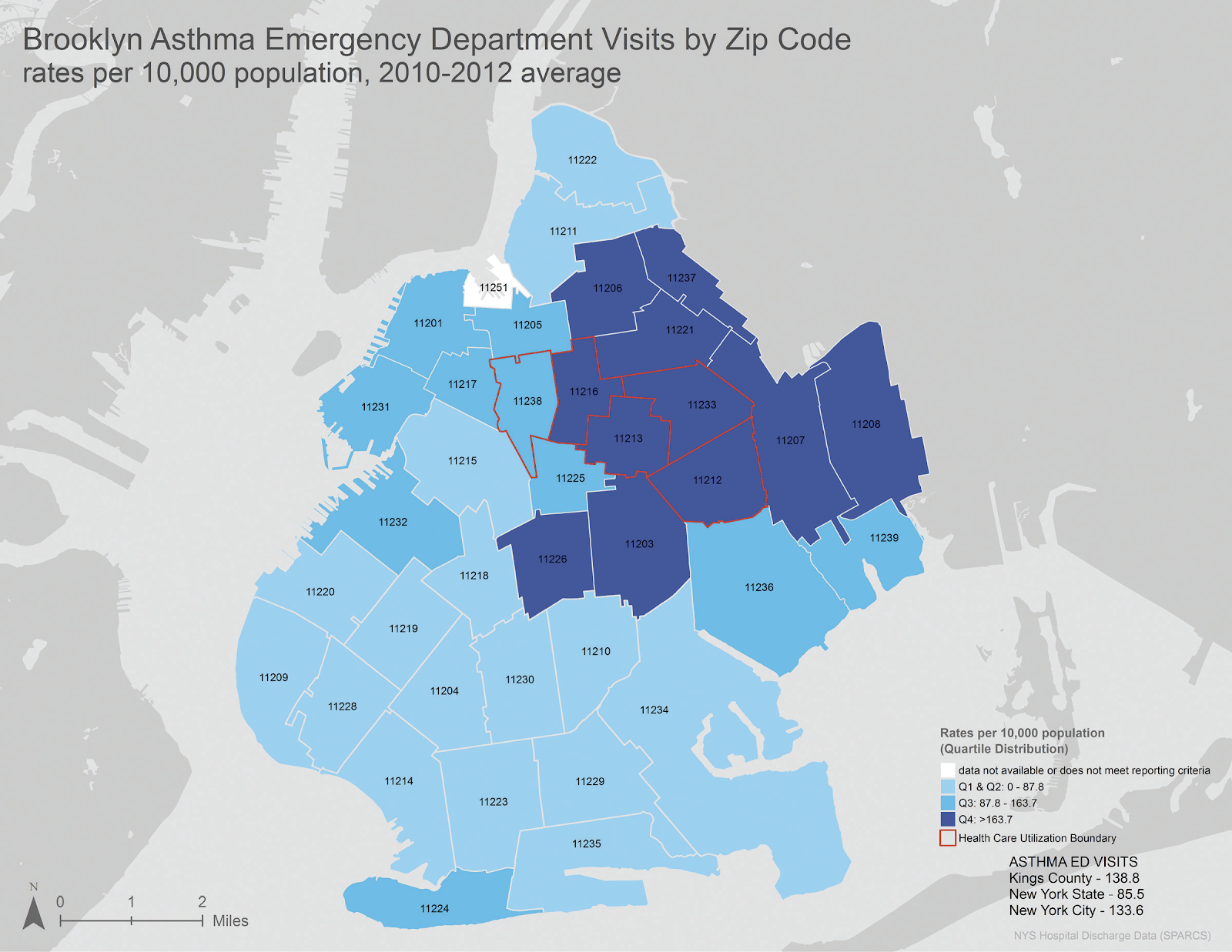 The MIT team’s research highlighted the fact that the community surrounding Interfaith had serious unmet medical needs for prenatal care, circulatory diseases, and asthma.  Yet, these needs were not being addressed by Interfaith, which focused primarily on mental healthcare.  Additionally, the team identified unmet needs for preventative healthcare, quality housing, and jobs in the community. It noted that in majority-minority Central Brooklyn, a root cause of health problems was unemployment and under-employment, stressful conditions that often lead to other forms of instability.

The Report argued that closing Interfaith Hospital would not save the State money as patients would simply show up, even sicker, at State-insured emergency rooms in other parts of the city. MIT’s team further insisted that the only meaningful way to reduce healthcare costs would be by improving community health.

While identifying the strong community need for a hospital, the Report concluded that Interfaith itself needed significant restructuring. It recommended the creation of a distributed network of primary and preventive care services throughout Interfaith’s service area, as well as expansion of prenatal and maternity care, community-based chronic disease prevention, and behavioral health services. It argued for a primary focus on preventive health care and SDOH.

To reduce risk factors that lead to chronic illness, the MIT Report proposed a comprehensive approach that would tackle all of the key issues together. Initial strategies included repurposing the hospital, creating preventative healthcare jobs in the community, improving housing with an infusion of labor pension funds, retrofitting buildings for energy efficiency and asthma reduction, and using hospital and other anchor institution procurement to strengthen local business and attract local manufacturing.51 By addressing the basics of wealth creation, financial stability and the local economy, Interfaith and its partners and allies could create a positive feedback loop of improved community health and wealth. CoLab has come to call this approach “wellness based development”

The Report called on the Governor to appoint a majority of hospital workers and community residents to the Interfaith governance board. The team recommended the State fund Interfaith as a demonstration project, making it the center for coordinated improvement efforts across the CCB service area. And as a critical interim step, the Report recommended that DSRIP provide funds to offset core Interfaith operating expenses for five years. The funding would enable Interfaith leaders to engage in an “intensive planning and community engagement process to transform the facility from an inpatient-focused, limited care facility to a hub for the promotion of community health and wellness.”52

A Roadmap for Change

The MIT recommendations gave a clear roadmap for a significant break from traditional healthcare models. They also fit within the State’s DSRIP process, which included all the hospitals in Brooklyn. Based on these conclusions, 1199 President, George Gresham, met with New York Governor Andrew Cuomo and secured a $120m commitment to keep the hospital open.

Coalition leaders identify the MIT Report as a turning point in the struggle to save Interfaith. The report made explicit the close connections between the domains of healthcare and economic development.  It animated the Coalition’s vision with healthcare data, specific concepts, terms, goals and financial projections. It also helped to bring the Coalition closer to a vision of Interfaith as an institution in and for the community, “able to anchor broader health-promotion efforts and transforming the existing health care delivery system in the community.”53

Backed by the findings of the MIT report, elected officials in Central Brooklyn sent a letter to the Governor in support of the innovative plan, as did ministers and community leaders in Brooklyn. At the request of the elected officials, the Coalition prepared a “to do” list for lawmakers at all levels of government.54